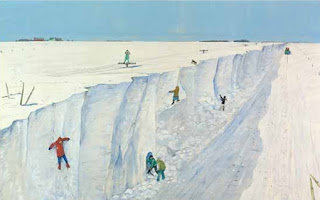 This is a picture book of a selection of William Kurelek's art, with much descriptive material written by Kurelek himself for a show at  an Oshawa art gallery. But the book also includes an excellent essay by the curator Joan Murray, which held some very interesting insights for me into who this man really was.

I always thought of Kurelek as primarily a pastoral painter who recorded scenes of farm life on the prairies, and he was that, but his main goal as a painter was to engage his audiences in deep thinking about spiritual principles. Kurelek converted to Catholicism in his 20s and became passionate about his belief that the world was going to hell in a handbasket, as the saying goes, and that the only hope for salvation is God. Besides farm scenes, the book includes many dark and disturbing images - funerals, a barn burned down, a metaphorical crucifixion in a field because of anger.

Joan Murray takes an unflinching view of Kurelek's art. She says there is "Much to hate" and that Kurelek had an "unformed sense of picture making" and a terrible sense of colour, with a few later exceptions. His characters are simplistic, often with hackneyed expressions and looking "as though they have no bones."  Kurelek was largely self-taught and admitted that what rules and techniques he did learn, he liked to flout. For instance, he had no trouble with dividing a canvas exactly in half.

I love Kurelek's folksy style and would love to do what he did, driving around the countryside and recording everyday scenes with a paintbrush.
Posted by Dianne Hiebert at 6:41 PM