Paris to the Moon by Adam Gopnik 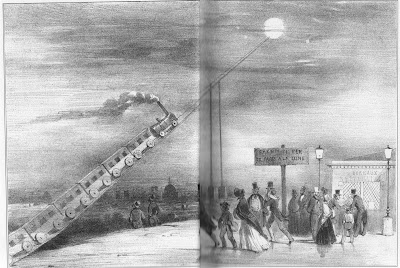 The title of this book is from this very cool old drawing called "A Railroad: From Paris to the Moon."

I'm having a lot of luck with my books this year. Paris to the Moon is a beautiful memoir of five years during which the author, his wife and his son live in Paris. Gopnik is a journalist for The New Yorker who developed a great love for Paris as a child, when his family lived there for a time, and this is something he wants his own child, who was just a baby when they moved, to experience.

The book meanders between deep reflections about French culture to intimate descriptions of the author's family life in Paris. Both Gopnik and his wife are devoted to their child's experiences. Early on he says "The romance of your child's childhood may be the last romance you can give up."

Gopnik considers Paris to be the most beautiful place in the world, and although it's a place that's never been high on my travel list, he is convincing and of course now I'd like to go. "We love Paris," he says, "not out of nostalgia, but because we love the look of light on things, as opposed to the look of light from things, the world reduced to images radiating from screens."

This latter really struck me recently while having a conversation with a friend. Quite often when I related an experience, she responded by comparing this to something in a TV show or a movie. This irritated me partly because I haven't seen any of these shows and so don't understand the allusion, but partly because I too prefer the look of light on things as opposed to the look of light from things.

Gopnik's depictions of French culture are extremely detailed - so nuanced that you'd have to have been there and know it at least to some extent for it to make sense. And he uses quite a few French words which I should have immediately looked up but didn't so lost some meaning because of that. The book was written as journals or articles while they lived in Paris between 1995 and 2000, so it reads a little bit historically by now. At times I found myself wishing I'd read it 10 years ago. But it is a lovely, rich book which will stand the test of time. The author is unashamedly in love with Paris, a true romantic, and I recommend Paris to the Moon to anyone who has ever been intrigued by the romance and fame of the City of Light.
Posted by Dianne Hiebert at 8:29 AM