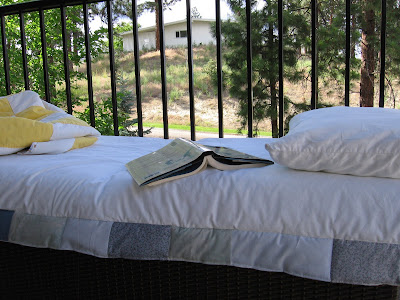 I feel as though I'm in hyperbole mode with my reading lately - everything is so fantastic. It must be my new reading spot - my wonderful new daybed on the back patio that I outfitted with what I imagine might be Cape Cod-looking linens.

Anyway, this latest very good book by Rob Bell asks more questions than it answers but the questions are the exciting thing - the fact that they're allowed to be asked and in fact there are lots of intriguing answers as well. The book is subtitled A book about heaven, hell and the fate of every person who ever lived. Bell, who is the pastor of megachurch Mars Hill, believes in God and he believes that Jesus was immortal, but among the biggest questions he deals with is "which God do you believe in?" and "which Jesus?" He believes that "we shape our God and then our God shapes us." He doesn't mean that we influence who God is, but that we each construct in our minds an idea of who God is and that's what we go by.

Bell's basic premise is his title. Love wins. He doesn't believe that God would create billions of people and then, only if they answer a "trick question" correctly, pray the right prayer, live in the right country, say the right words, do they get to go to heaven. He says he would never consider believing in a God like that. He shows how in the book of Revelations it says that the gate to the eternal city (heaven) is always open. He believes that heaven will be on earth, (and there is ample evidence for this in the Bible), and he also believes that heaven and hell are, in many ways, right now. He has a great way of showing how time was thought of differently by the ancient Hebrews and how we have mistranslated and misconstructed many of the Scriptures into "then" and "now" and "later" when they are really very fluid. He unpackages a lot of the mystery of what is metaphorical and what was (then) contemporary culture in the Bible, and I guess that's open to interpretation but what I read made so much sense to me.

Bell has a lot of things to say about our responsibility to be loving and help to build heaven on earth. He does also believe that there will be a time when love will win on earth and that God will then say to those who persist in wickedness: Not here you don't. He thinks that there are lots of chances both in this life and later for people to decide whether they want to do good or not. He says people choose, now, daily, to live in hell and there's no reason to believe they wouldn't continue to choose an afterlife like that. But he is sure even they will have infinite opportunities to choose to change. People do change.

Bell says most churches don't succeed in evangelism because they don't actually like the arbitrary God they serve very much, so they don't really want to tell anybody about him.

The best part of the book is about Jesus. I was raised to think of Jesus in a very narrow context - he was a Jew, the saviour of the "chosen people" and if you were kinda lucky that might extend to some Gentiles too, but mostly there are "the lost" who will forever not know about him. I found myself most of my life being tired of Jesus and not thinking he was very interesting and in fact being kind of embarrassed to even say his name. Bell shows us a radical Jesus on a universal stage, representing every person who ever lived, and being a different "shape" in different cultures. He tells of missionaries who go to other cultures and tell the people about Jesus, and they say, "oh, we've been talking about him for a long time." Bell says some of us have so many bad connotations with the word Jesus that we can't be interested in the fabulous being he was. He takes a verse like "no one comes to the Father but by me [Jesus]," agrees with it, and then says that there are millions of different ways that could happen, not just one, as I was taught - namely that you have to "accept Jesus as your personal Saviour," a phrase that occurs nowhere in Scripture.

Bell believes (and quotes extensively from Scripture to show this) that there are lots and lots of different ways of being saved, again flying in the face of everything I was taught, but exactly coinciding with what I've secretly believed for years.

Throughout the book Bell refers to "making space" for alternative ways of looking at things, and encourages his readers to imagine the infinite love of God for each of us and to what lengths he would go to get us on the right track, loving each other, creating, and enjoying the world. And how absolutely unfeasible it is that God would give people just a blip of a chance to connect with a certain way of belief and getting saved and if you missed it - oops, goodbye forever. Suddenly God doesn't love you anymore because you had your chance and he sends you to hell. This has never made sense to me! Especially as a parent. Who would do that to a child they loved? And I'm sensing that soon I might be able to say with great joy, maybe even publicly: "I don't believe that any more."
Posted by Dianne Hiebert at 8:43 PM